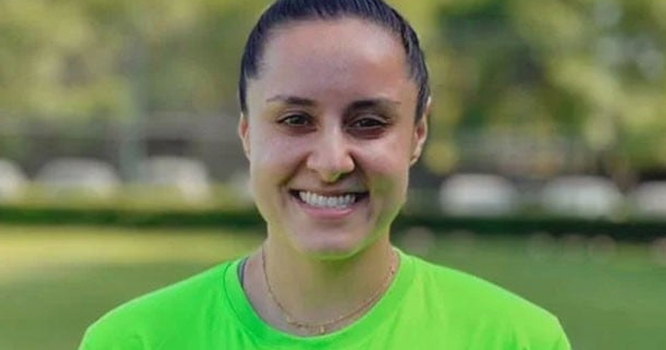 Karachi: Captain Maria Khan, who saved Pakistan from defeat by scoring a brilliant free-kick goal in the match against Saudi Arabia, is a close relative of two world-renowned squash legends. In a match in the 4-nation women’s football tournament in Saudi Arabia, Maria Khan, the captain of the national team, scored a goal that made her world famous. Due to this goal, Pakistan was also saved from defeat.

Maria Khan took such a free kick from the touchline that the football flew into the pool. The kick was so powerful, fast and on target that the goalkeeper of the opposing team could not stop it even after touching the ball. The video of this goal went viral on social media. Major critics of football could not remain without praising this goal of Pakistani female footballer. Pakistani consumers also appreciated Maria Khan. Maria Khan is a close relative of two squash legends in Pakistan. She is the granddaughter of world-renowned squash player Hashim Khan and was born in America and received squash training from her maternal grandfather there. Apart from this, Maria Khan is also the niece of squash legend Jehangir Khan who won six World Opens and 10 British Opens. After completing her studies in America, Maria Khan joined a football club there as a goalkeeper. Later in 2013, Maria Khan had to come to the UAE for higher education, but even here she continued her passion for football and started playing as a midfielder in the Emirati team. Maria Khan joined the WAPDA team in Pakistan in 2018 and was named in the 30 players in the 2020 Women’s National Football Team and captained the national team for the SAFF Games in Nepal in the same year.

The world’s biggest sports family and its legacy lives on!

Hashim Khan would be so proud. 🇵🇰🇵🇰🇵🇰pic.twitter.com/xith8VJybN