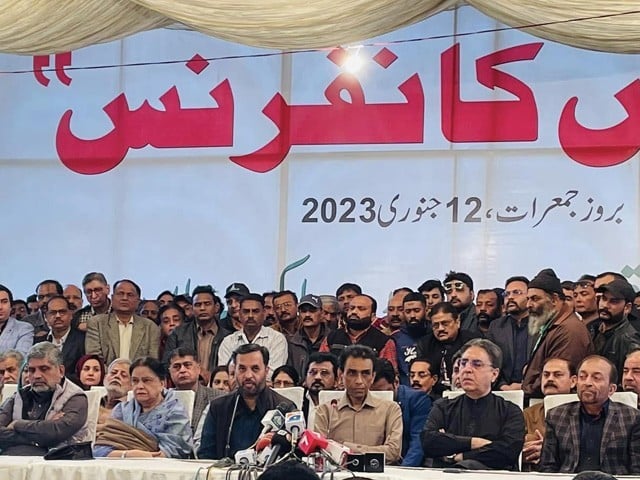 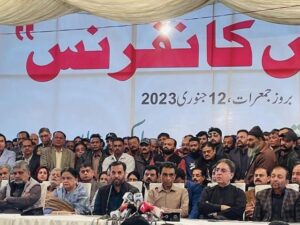 KARACHI (Quadrat Daily) The factions that broke out of the Muttahida Qaumi Movement have merged, Mustafa Kamal announced that Pak Sarzameen Party and Farooq Sattar will merge the organization’s revival committee of MQM Pakistan and work under the leadership of Khalid Maqbool Siddiqui. Khalid Maqbool Siddiqui, Mustafa Kamal, Farooq Sattar and other leaders held a joint press conference in the park adjacent to Bahadurabad, the temporary center of MQM Pakistan. Where Khalid Maqbool Siddiqui thanked all the participants for coming.
MQM Pakistan canon Khalid Maqbool Siddiqui said that the people of urban Sindh have been exploited for five years. There was a need to match voice to voice, Karachi is mini-Pakistan where all language speakers live.
Khalid Maqbool Siddiqui said we migrated for the sake of Pakistan, the joint efforts of all of us paid off. We will contribute, Pakistan was created and the responsibility to save Pakistan is on us.
“Khalid is ready to work under Maqbool Siddiqui”
Pak Sarzameen Party Chairman Mustafa Kamal said that today will be written as an important day in the history of Pakistan. He left the MQM on 14 August. There was no personal grudge. What did he think, this city was not liberated so that Asif Ali Zardari would occupy it.
He said that “some central districts and some districts started dreaming of occupying Korangi, today Mustafa Kamal and his companions have come for another migration, we have come to migrate from Pak Sarmeen Party to MQM. Explain to the ministers that they cannot make Bilawal the prime minister by opposing Karachi.
Mustafa Kamal said that ‘Asif Ali Zardari will have to treat the sufferings of Karachi and Hyderabad, no basic facilities are available to the people of Sindh, ask the rulers of Pakistan to treat the sufferings of Karachi, there was a difference between us that was open. Let us all unite for Karachi today, Karachi was built before, now we will rebuild the city.
Chairman PSP said that “you cannot run long term with IMF but you can dream of a strong Pakistan by strengthening Karachi”. Mustafa Kamal said I am asking the people who are running the state of Pakistan and the establishment to grant amnesty to the youth of Karachi and forgive them. Mustafa Kamal clarified that “we will work under the supervision of Khalid Maqbool Siddiqui, if it is bad for the migrants, it will not be good for the Pakhtun Punjabis and Sindhis.” , everyone who speaks the language is willing to work under one flag.
“Our actions will tell why we have gathered”
Dr. Farooq Sattar said that today is an important day for Pakistan and the urban areas of Sindh, MQM is a ray of hope in the current political and economic crisis of Pakistan. Farooq Sattar said that political parties are helpless, our action will show why we came together.
He said that the $10 billion aid from Geneva is a matter of honor for us. If given a chance, Karachi alone could earn $10 billion. Today we are launching an organized and dynamic MQM, the division of MQM was a deadly poison, put differences aside, MQM is going to be united.
Farooq Sattar said that a line was drawn on August 22, so we also drew a line. Yes, we should be given an opportunity to play a national role in the country. He said that ‘Khalid Maqbool Siddiqui will be the leader for the next ten years and during this time we will lead the youth’.

RELATED ARTICLES
NewsPipa The teams of Pakistan Army and Air Force have reached the final of the Inter-Departmental Basketball Championship by defeating WAPDA and Pakistan Ordnance...
Read more
National