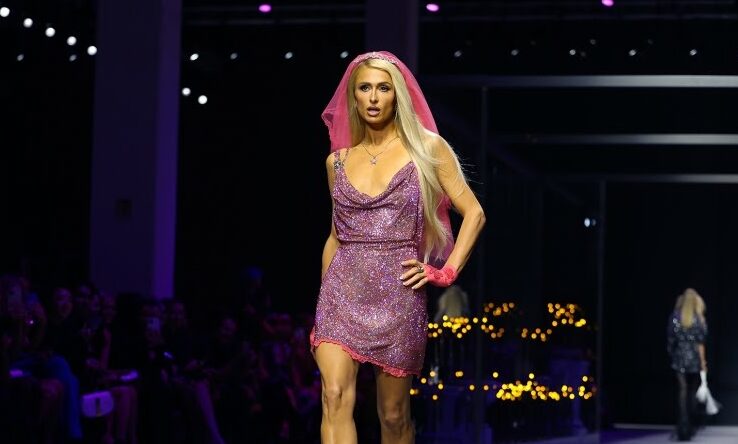 While Julian Macdonald designed the original for Hilton, the metallic mini has inspired many designers over the years, with versions seen on celebrities such as Kendall Jenner and Simone Biles.

You may also like: James Corden reflects on ‘dangerous’ decision to quit The Late Late Show

Nicky Hilton dressed up like her little sister in 2002 for Halloween 2018.

Paris Hilton accessorized on the Versace runway with Barbie core pink pumps and her signature fingerless gloves, topped off with a matching veil.

But the ‘Simple Life’ star wasn’t the only bride to show up on the runway. Several models, including Bella Hadid, also wore colorful veils to match their outfits.

This is just the beginning of Milan Fashion Week, with the Dolce & Gabbana show on Saturday morning.

You May Also Like: Kylie Jenner Shows Off Busty Display In New Sexy Photos

Former BFF of Hilton Kim Kardashian has already started posting tons of teaser content ahead of the show, hinting that sister Khloe Kardashian and mother Kris Jenner are also in Italy.

Perhaps Hilton and Kardashian will walk the Dolce & Gabbana runway or simply sit front row together.