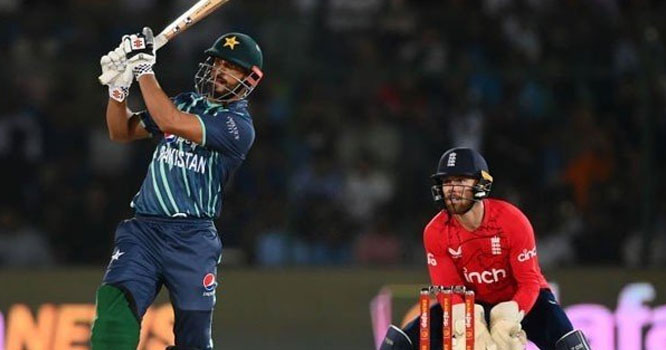 Karachi (Sports Desk) In the third T20 match of the series, England defeated Pakistan by 63 runs and the English team took a 1-2 lead in the series. Chasing a target of 222 runs, Pakistan lost seven players for 143 runs. Chasing the target, Pakistan’s batting did not get off to a good start and the opening four returned to the pavilion for 28 runs. Then Shan Masood and Khushdil Shah put on 62 runs for the fifth wicket partnership but here Khushdil Shah was dismissed for 29 runs.

Pakistani batsman Shan Masood scored the first half-century of his career in T20 International. He made his debut in the series against England. England Batting When the English team opened the batting, opener Phil Salt scored 8 and was caught out by Mohammad Hasnain for 18, the visiting team returned to the pavilion for 82 with three players. David Mullan scored 14 runs and Will Jack, who replaced Alex Hales, scored 40 runs. After the fall of three wickets, the middle order of the English team did the best batting. Batsman Ben Duckett scored 69 runs and Harry Brook remained unbeaten on 88 runs. A partnership of 139 runs was formed between the two players for the fourth wicket. Pakistan fast bowler Shahnawaz Dhani proved to be the most expensive bowler, conceding 62 runs in his 4 overs and taking no wickets. Usman Qadir dismissed two players. In the toss, Pakistan made no changes to the team and England made three changes to the team. Will Jacques replaces Alex Hales, Mark Wood replaces Luke Wood and Racey Topley replaces David Valley. Babar Azam, the captain who won the toss and batted, said that the pitch looks good where a target of 150 to 180 runs is available, it is not easy to play two consecutive matches. England captain Moeen Ali said he used to bowl after winning the toss, but now batting first, he needs to aim big and get quick wickets for Pakistan. It is to be noted that yesterday in the second T20I, Pakistan defeated England by 10 wickets to level the seven-match series 1-1. Pakistan XI captain Babar Azam, Muhammad Rizwan, Haider Ali, Shan Masood, Iftikhar Ahmed, Khushdil Shah, Muhammad Nawaz, Usman Qadir, Haris Rauf, Shahnawaz Dhani, Muhammad Hasnain. England XI Will Jacques, wicketkeeper Phil Salt, David Mullan, Ben Duckett, Harry Brook, captain Moeen Ali, Sam Curran, Recy Topley, Adil Rashid, Mark Wood, Liam Dawson.

RELATED ARTICLES
NewsPipa Web Desk: There is no fund to spray TMA workers in Khyber for dengue fever in Peshawar Division, there...
Read more
National

NewsPipa French authorities closed the airport in the southern city of Montpellier indefinitely on Saturday after a cargo plane overshot the...
Read more
National